Higher education is considered as an essential element for the empowerment of the individuals and societies. Social dimension, as part of such process, has the potential to promote equality, fairness and inclusion in higher education, considering such action is focused in the equity and wellbeing concepts, also in the framework of the EHEA.

In the Paris Communiqué (2018), ministers recognised that

“[...] further effort is required to strengthen the social dimension of higher education. In order to meet our commitment that the student body entering and graduating from European higher education institutions should reflect the diversity of Europe’s populations, we will improve access and completion by under-represented and vulnerable groups. Therefore, we mandate the BFUG to take this issue forward by the next EHEA Ministerial conference.”

The Ministers also agreed to develop a common understanding of the concept of social dimension within the BFUG. As such the Ministers agreed to develop proposed principles and guidelines for the social dimension of HE within the EHEA and to have them submitted to the 2020 Ministerial Conference for adoption, through the BFUG. Other objectives agreed at the Paris Ministerial Conference aim at gathering and examining of the data on good practices in the area of social dimension, drawing on previously agreed commitments and existing data, exploring the scope of the EHEA cooperation to strengthen the social dimension of HE as well as start working on Peer Learning Activities within the Social Dimension area.

In the Yerevan Communiqué (2015), ministers agreed that

"Making our systems more inclusive is an essential aim for the EHEA as our populations become more and more diversified, also due to immigration and demographic changes."

They also agreed to undertake to widen participation in higher education and support institutions that provide relevant learning activities in appropriate contexts for different types of learners, including lifelong learning. They will improve permeability and articulation between different education sectors. They will enhance the social dimension of higher education, improve gender balance and widen opportunities for access and completion, including international mobility, for students from disadvantaged backgrounds. They will provide mobility opportunities for students and staff from conflict areas, while working to make it possible for them to return home once conditions allow. They also wish to promote the mobility of teacher education students in view of the important role they will play in educating future generations of Europeans.

With the Bucharest Communiqué (2012), ministers reaffirmed their commitment to the social dimension in higher education and thus to working towards the goal that

This goal had been formulated for the first time at the London summit of 2007, where ministers had also stressed "the importance of students being able to complete their studies without obstacles related to their social and economic background", after the social dimension had entered the Bologna Process with the Prague Communiqué in 2001 and gained importance in subsequent years.

To further this goal, ministers at their meeting in Bucharest in 2012 agreed "to adopt national measures for widening overall access to quality higher education" and to "work to raise completion rates and ensure timely progression in higher education". More specifically, they agreed to "step up [their] efforts towards underrepresented groups to develop the social dimension of higher education, reduce inequalities and provide adequate student support services, counseling and guidance, flexible learning paths and alternative access routes, including recognition of prior learning". They also encouraged peer learning on the social dimension and endeavored "to monitor progress in this area".

The PL4SD (peer learning for the social dimension) project, which seeks to support policy-makers and practitioners in developing effective measures for improving the social dimension of the EHEA, was one of the main response to the ministerial wish.

The European Higher Education Area in 2015: Bologna Process Implementation Report is an important contribution to the monitoring of the social dimension progress in the area.

The social dimension plays an important role in enhancing the attractiveness and competitiveness of the European Higher Education Area (EHEA). The EHEA aims to widen overall access and increase participation and completion of underrepresented groups in higher education, according to the diversity of the national populations. In its turn, widening access to quality higher education is viewed as a precondition for societal progress and economic development.

Taking into account the interlinkages between the two policy areas, in its 2012-2015 work programme the BFUG decided to establish a single Social Dimension and Lifelong Learning Working Group (SD&LLL WG).

About the working group report

Furthermore, SD&LLL WG’s mandate and membership as well as the achievement of the WG’s action plan are introduced. This section also includes the inputs from the four thematic groups (TGs) established under the WG to take further the goals identified in the action plan. In addition, the document provides a report of activities of the Peer Learning for the Social Dimension (PL4SD) project as of November 2014 and puts forward proposals for its future.

The SD&LLL WG puts forward two main recommendations for adoption by the Ministers in Yerevan in 2015: 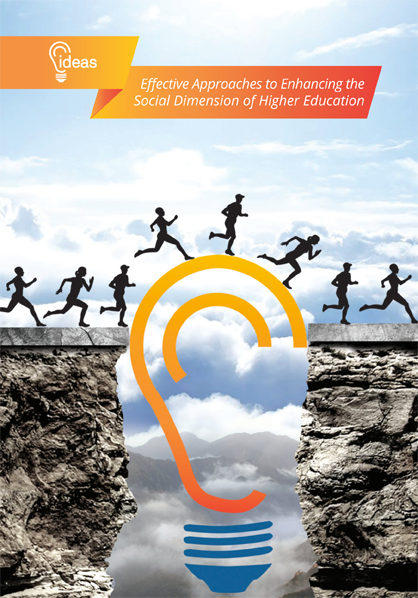 Effective Approaches to Enhancing the Social Dimension of Higher Education

The consortium consists of the Tavistock Institute for Human Relations (United Kingdom), the European Student Union (Belgium), ECHO (Netherlands), EURASHE (Belgium) and the Knowledge Innovation Centre (Malta). The presented publication is the work of a concerted effort from these partners to synthesise the results of the project.

By identifying effective and efficient approaches to improve the social dimension in higher education, the IDEAS Project final report presents examples of good practice with proven quantitative and qualitative successes. In the report, which brings together the entire work of the project over the last 2.5 years, the partners provide the necessary data and frameworks of tested experience to inspire (higher) education institutions in particular, other stakeholders like governments (local & national) and foundations to translate, implement and replicate.